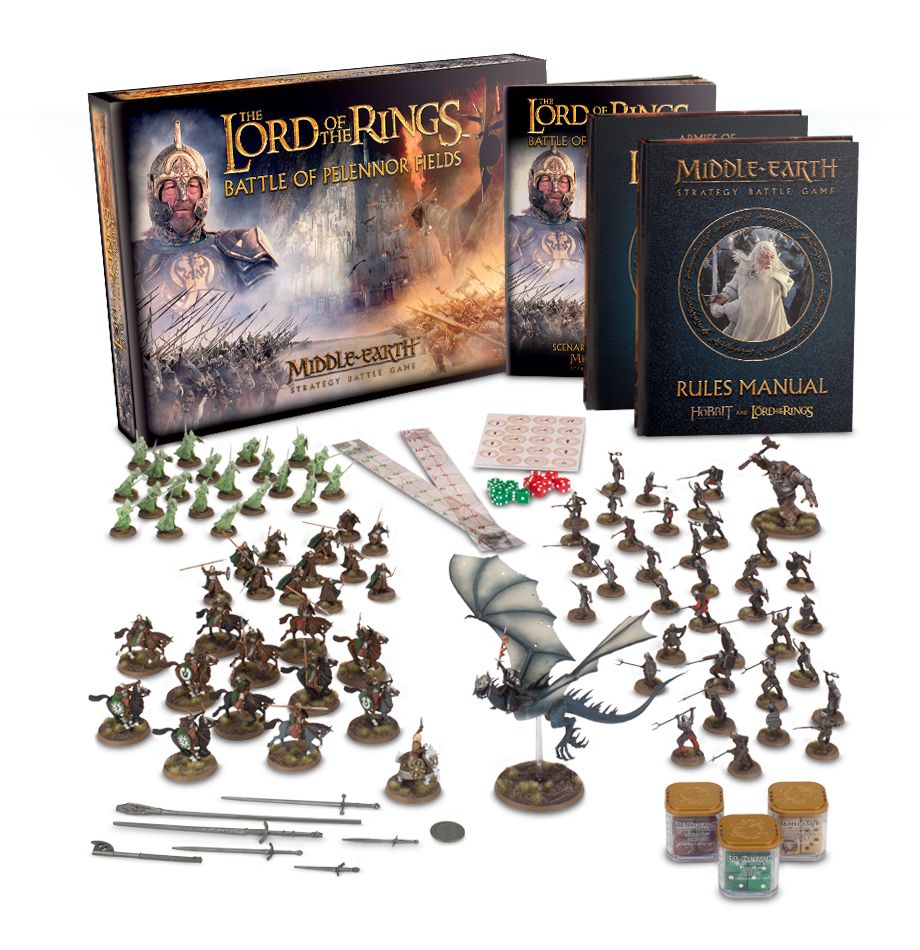 Due to the weight of this product, your order will be upgraded to Fast delivery free of charge. Just choose Standard delivery during checkout and we’ll do the rest.

An impressively hefty bundle for the Middle-earth collectors this week – we’ve put together all the new releases in a single place, so you can get yourself up to date with all the rules, accessories and miniatures you need to recreate exciting battles between good and evil! Included:

The Lord of the Rings™: Battle of Pelennor Fields

In this box set, you’ll find all the miniatures (no less than 84!) and rules you and an opponent will need to defend the city of Minas Tirith – or take command of the forces of Evil and wage destruction and war upon the kingdom of Gondor. Included:

This box contains the complete, unabridged 208-page hardback Middle-earth Strategy Battle Game Rules Manual, packed with essential rules, guides and information covering Open, Narrative and Matched Play with your Middle-earth miniatures. As well as this, there’s a 16-page booklet – this contains the scenarios and profiles you’ll use in conjunction with the Rules Manual to recreate the Battle of Pelennor Fields with the miniatures in this box.

Armies of The Lord of the Rings™

The Armies of The Lord of The Rings™ is an expansion for the Middle-earth Strategy Battle Game that enables you to recreate your favourite scenes from The Lord of the Rings™ Motion Picture Trilogy with your collection of Citadel and Forge World models. It includes all the information you need to take control of all the Heroes and armies on the tabletop – included in the book:

The Lord of the Rings™ Measurers

– A Morgul-blade, measuring 3”;
– Sting, measuring 4”;
– Gimli’s Axe, measuring 5”;
– Glamdring, measuring 6”
– Anduril, measuring 8”;
– A Witch-king of Angmar’s Sword, measuring 10”;
– Gandalf the White’s Staff, measuring 12”;
– A double-sided Priority marker, featuring the white tree of Gondor on one side and the Eye of Sauron on the other.

The One Ring Dice

Coloured in gold swirls with black markings, each features the infamous phrase ‘One Ring to Rule Them All™’ in Elvish script on the 6.

Coloured green with pearl swirls with white markings, each features the White Horse of Rohan on the 6.

Coloured red with brass markings, each features the sinister Eye of Sauron blazing balefully from the 6.